You can conquer the world.

Or, at least, once upon a time, Donald Trump and his crew of body guards.

According to an article at this link, a disagreement between Donald Trump’s bodyguards and the security guards at a Rolling Stones concert in Atlantic City  – Trump had shown up uninvited (he had been told not to attend as a condition of the Stones performing)  but departed on being told that Keith Richards had “pulled out his knife and threatened to take care of business himself – then reached the level where some of the DT crew pulled out brass knuckles and, in response, the RS crew “grabbed “tire irons and hockey sticks and screwdrivers”.

Of course you’d expect there to be screwdrivers backstage and elsewhere at a Stones’ concert. Kudos, though, for the hockey sticks.

The article doesn’t mention the brand, whether they were composite, one piece, two piece,  lies, even whether any of the sticks were goalie sticks.

Over on Slaw, I’ve written a rant, and posted it, too, about yet another judge’s problematic use of “substantial connection” when seemingly discussing the meaning of factual causation in the Canadian law of negligence. 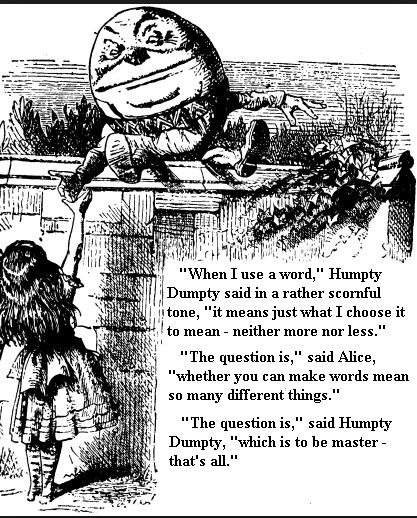 This one isn’t about a B.C. decision. The context is a motion by a defendant, in an Ontario action, to dismiss the action. The motion – an application for B.C. types – failed. I think it’s a safe assumption that the motion judge isn’t a regular reader of this blog, let alone a follower. Besides, the Rockies are in the way.

(Image from taken from a public domain version of the text of Lewis Carroll’s “Through The Looking Glass”. You’ll find it in c. 6.)

When the Supreme Court of Canada says “X” in 2007, and repeats “X” in 2011 adding explicitly that “X does not mean Y but means Z”, it is  reasonable to assume (is it not?) that, once word of what was said in 2007 and repeated in 2011 spreads through the “jurisprudential aether”, however long that takes, the judges of the lower courts in Canada will pay attention.

It’s always worth quoting this reminder about pecking orders in the Canadian judicial universe:

[51]  Any legal system which has a judicial appeals process inherently creates a pecking order for the judiciary regarding where judicial decisions stand on the legal ladder.

[53]  I do not overrule decisions of a judge of this court. The judicial pecking order does not permit little peckers to overrule big peckers. It is the other way around.

Given the above, the concept of common sense, meaning whatever it is that common law judges advert to when they call on that concept to provide an explanation for a conclusion, requires us (does it not?) to conclude:

(1)  the Court of Appeal of Newfoundland and Labrador would be aware, by now, of what the Supreme Court of Canada declared an aspect of Canadian law to be, in common law Canada,  about 8  years ago, or at least about 4 years ago, because about 4 years and certainly about 8 years is more than enough time for some medium to transport the information contained in the SCC’s statements from Ottawa to St. John’s;

(2)  the same proposition applies to the state of knowledge of lawyers in St. John’s who practice in the relevant area of law; certainly, at least, those professing expertise in the area.

If you accept (1) and (2) what could be the explanation for what happened in the case I’ll quote from immediately after the break?

No, it’s not a case from the province on Canada’s Western coast. Or any of the territories on Canada’s northern coast. Not even a Prairies, Central Canada, mainland Atlantic Canada, or Canada’s smallest province, case.